The aim of the forum is to provide collaboratively developed and consensus-based seasonal climate outlooks and related information on a regional scale. The forum outlook and its activities contribute significantly to one of the key roles of the ASEAN Specialised Meteorological Centre (ASMC), which is to conduct climate and seasonal prediction for ASEAN region through pooling the expertise of ASEAN National Meteorological Services. The consensus outlook for the June-July-August 2016 season for the ASEAN region benefits from the guidance of the WMO GPC model outputs, as well as other global providers. In particular, use is made of the multi-model ensemble forecasts from WMO LC-LRFMME as well as country-level forecasts developed by the participating national experts. The forum reviewed the present climate conditions in the Southeast Asia region, and discussed the various global and regional climatic factors that will influence the JJA season in the area. In particular, the forum took into account the significant influence of the El Niño Southern Oscillation (ENSO) and the Indian Ocean Dipole (IOD) on the climate over Southeast Asia.

Conditions and Outlook for JJA 2016

Recent analyses of sea surface temperature anomalies (SSTA) and atmospheric conditions over the tropical Pacific have confirmed that the on-going El Niño is in its decaying stage and is likely to end before Northern Hemisphere Summer 2016. In May 2016, positive weak SSTAs were observed confirming that an ENSO-neutral condition is likely to develop in May-June-July 2016 season.

During June-July-August 2016, most international climate outlook models favor the development of La Niña condition. La Niña is characterized by persistent cooler tropical Pacific SST anomalies (-0.5°C or below) and stronger easterly winds over the tropical Pacific Ocean. While varying in local impacts, La Niña events are generally associated with wetter-than-average rainfall conditions over the ASEAN region, especially in the southern half of the region.

The IOD is predicted to be in a persistent negative state starting in JJA 2016 and is likely to continue towards the end of 2016. Negative IOD is generally associated with warmer than SSTA in tropical eastern Indian Ocean in contrast with cooler than normal SSTA in tropical western Indian Ocean. While negative IOD can potentially reinforce the impacts of La Niña, the low skills of climate models for IOD during JJA 2016 should be taken into consideration.

Taking into consideration the national-level forecasts, the present status of the climate conditions affecting Southeast Asia, and the forecasts available from the GPCs and other global centres, the forum agreed on the following consensus-based outlook for the JJA 2016 season for the Southeast Asia region:

Above normal temperatures are very likely over much of the Southeast Asia region for the upcoming Northern Hemisphere summer monsoon season (June-July-Aug), with the highest probabilities over the Philippines and mainland Southeast Asia. 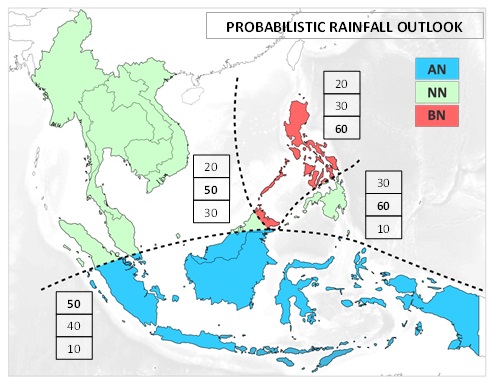 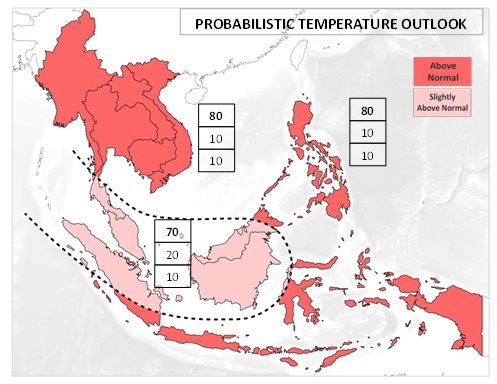 The forum would like to thank the National Meteorological Services of the ASEAN Member countries for conveying their national-level forecasts, the Global Producing Centres, and other participating international climate modelling centres for their products and expertise made available for this climate outlook forum. The forum would also like to thank the WMO Secretariat for providing support and guidance for this bulletin.