The Ninth ASEAN Climate Outlook Forum (ASEANCOF-9) was held in Hanoi, Vietnam from 15-17 November 2017. The Forum was organised by the National Hydro-Meteorological Service of Viet Nam (NHMS) in cooperation with the ASEAN Specialised Meteorological Centre (ASMC). The Environment and Climate Change Canada (ECCC) provided financial support for the Forum through its funded project: “Building Resilience to High-Impact Hydrometeorological Events through Strengthening Multi-Hazard Early Warning Systems in Small Island Developing States (SIDS) and Southeast Asia (SEA)”. The event was co-funded by the World Meteorological Organization (WMO) and NHMS Viet Nam.

The Forum was attended by representatives of the National Meteorological and Hydrological Services (NMHSs) of Indonesia, Lao, Malaysia, Myanmar, Philippines, Singapore, Thailand, and Vietnam who discussed on the consensus outlook. They were joined by experts from the Bureau of Meteorology, Australia (BoM), European Centre for Medium-range Weather Forecast (ECMWF), International Research Institute for Climate and Society (IRI), Korea Meteorological Administration (KMA), and the WMO Lead Center for Long Range Forecast Multi-Model Ensemble (WMO LC-LRFMME). Seasonal climate outlooks from the Japan Meteorological Agency (JMA) and UK MetOffice (UKMO) was presented by ASMC on their behalves. The Forum also reviewed the present climate conditions in the Southeast Asia region, and discussed the various global and regional climatic factors that will influence the DJF season in the area. In particular, the Forum took into account the influence of the El Niño Southern Oscillation (ENSO), the Indian Ocean Dipole (IOD), as well as tropical cyclones and monsoon activities on the climate over Southeast Asia.

The ASEANCOF is an avenue to collaboratively develop a consensus-based seasonal climate outlook and related information on a regional scale. The Forum outlook and its activities contribute significantly to one of the key roles of the ASEAN Specialised Meteorological Centre (ASMC), which is to conduct climate and seasonal prediction for ASEAN region through pooling the expertise of ASEAN NMHSs. The Forum also supports the activities of the Southeast Asia Regional Climate Centre Network (SEA RCC-Network) – which entered the demonstration phase on 7 November 2017 – by providing the consensus outlook as well as the platform to discuss issues on provision of climate services in the Southeast Asia region.

Sea surface temperature (SST) over the tropical Pacific Ocean is currently cool (negative anomaly) with La Niña like or borderline conditions. Atmospheric indicators of ENSO conditions (e.g. the Southern Oscillation Index, SOI) are broadly within neutral at the moment.

However, models suggest the tropical Pacific Ocean will continue to cool. There is chance of a weak La Niña forming in late 2017 of at least 60%, around double the normal likelihood for La Niña. If it forms, the event is not expected to last beyond March 2018. While varying in local impacts, La Niña events are generally associated with wetter-than-average rainfall conditions over the ASEAN region, especially in the southern and eastern halves of the region.

Taking into consideration the present status of the climate conditions affecting Southeast Asia, the forecasts available from the GPCs and other global centres, and the national-level assessment from the NMHSs, the Forum agreed on the following consensus-based outlook for the DJF 2017-2018 season for Southeast Asia.

Above normal temperatures are favoured over much of the Southeast Asia region for the upcoming boreal winter monsoon season (Dec-Jan-Feb 2017-2018), with the highest probabilities over the eastern Maritime Continent, northern Mainland Southeast Asia, and Sumatra. Below normal temperatures are favoured over northern Philippines and southern Vietnam.

The following maps provides the probabilistic outlooks for DJF 2017-2018 in terms of tercile categories of “Above Normal” (AN; upper tercile), “Near Normal” (NN; middle tercile), and “Below Normal” (BN; lower tercile). 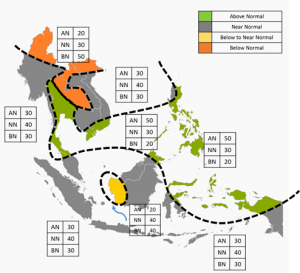