The ASEAN Climate Outlook Forum (ASEANCOF) is an avenue to collaboratively develop consensus-based seasonal climate outlooks and related information on a regional scale. The forum’s outlook and its activities contribute significantly to one of the key roles of the ASEAN Specialised Meteorological Centre (ASMC), which is to conduct climate and seasonal prediction for the ASEAN region through pooling the expertise of ASEAN National Meteorological and Hydrological Services (NMHSs). In 2021, the ASEANCOF Working Group was established with the goal to guide and support the long-term development of ASEANCOF, in particular with regard to the implementation of objective outlooks.

The sixteenth session of ASEANCOF (ASEANCOF-16) was organised by the ASEAN Specialised Meteorological Centre (ASMC) in collaboration with the ASEANCOF Working Group. Representatives from the NMHSs of ASEAN Member States created a consensus forecast for the boreal summer monsoon 2021 in the ASEAN region. The consensus for June-July-August (JJA) 2021 outlooks was achieved through an online session, which included presentations from NMHSs, questionnaires and discussions regarding the current conditions and predictions for the Southeast Asia region. In particular, the forum considered the possible influence of the El Niño Southern Oscillation (ENSO) and the Indian Ocean Dipole (IOD) on the climate system over Southeast Asia.

Recent analyses of sea surface temperature (SST) anomalies over the equatorial Pacific indicated near- to below-average SSTs across most of the central and eastern tropical Pacific Ocean and that the previous La Niña event has weakened. Most ENSO indicators are now in line with ENSO-neutral conditions.

The current Indian Ocean Dipole (IOD) state is neutral and is expected to remain neutral for most of JJA 2021. There is a small increase in chance that a negative IOD event may develop in the second half of the year.
The onset of the Southwest (SW) Monsoon season is expected to be near-normal (typical) for much of the region, although may be slightly delayed for some northern regions.

Over much of Southeast Asia, the strength of the SW monsoon is expected to be near-normal. The development of a negative IOD event may increase the monsoon strength later in the outlook period. Furthermore, models are predicting the West Pacific Subtropical High to be displaced northward, which would bring near- to above-normal SW monsoon conditions to the Philippines.

Overall, the tropical cyclone frequency is expected to be below-average for the Bay of Bengal, while near- to above-average around the West Philippine Sea/South China Sea and the Western North Pacific (WNP). This is due to ENSO-neutral conditions as well as model predictions where above-average tropical cyclone activity in the WNP is forecasted during JJA 2021 with north-westward moving tracks.

Taking into consideration the national level forecasts, the present state of the climate, and the forecasts available from the GPCs and other global centres, the forum agreed on the following consensus-based outlook for JJA 2021 for the Southeast Asia region:

For the upcoming boreal (Northern Hemisphere) summer season (June-July-August 2021), near-normal rainfall is expected for much of the region, including Myanmar, Thailand, Malaysia, Viet Nam, Brunei Darussalam, and northern Philippines.

Near- to above-normal rainfall is expected for parts of the Maritime Continent, including Singapore and central and southern Philippines.

Refer to Annex A for reference on what is meant by “above-, near-, or below-normal” in the outlook. For more information on the boreal (Northern Hemisphere) summer monsoon outlook and further updates on the national scale, the relevant NMSs should be consulted (see Annex B).

The following maps provide the probabilistic outlooks for JJA 2021 season in terms of tercile categories of “Above Normal” (AN: upper tercile), “Near Normal (NN: middle tercile) and “Below Normal” (BN: lower tercile). 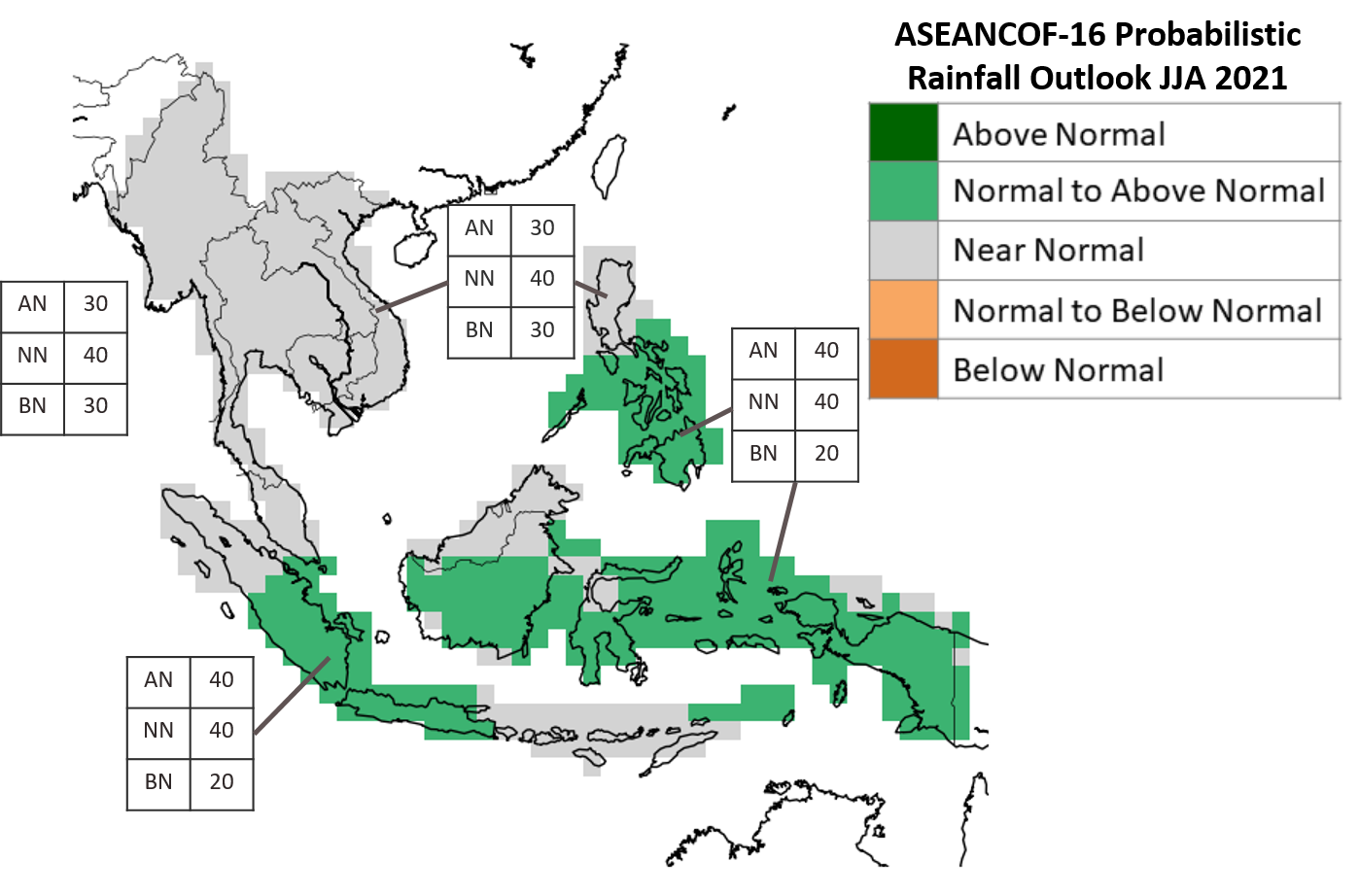 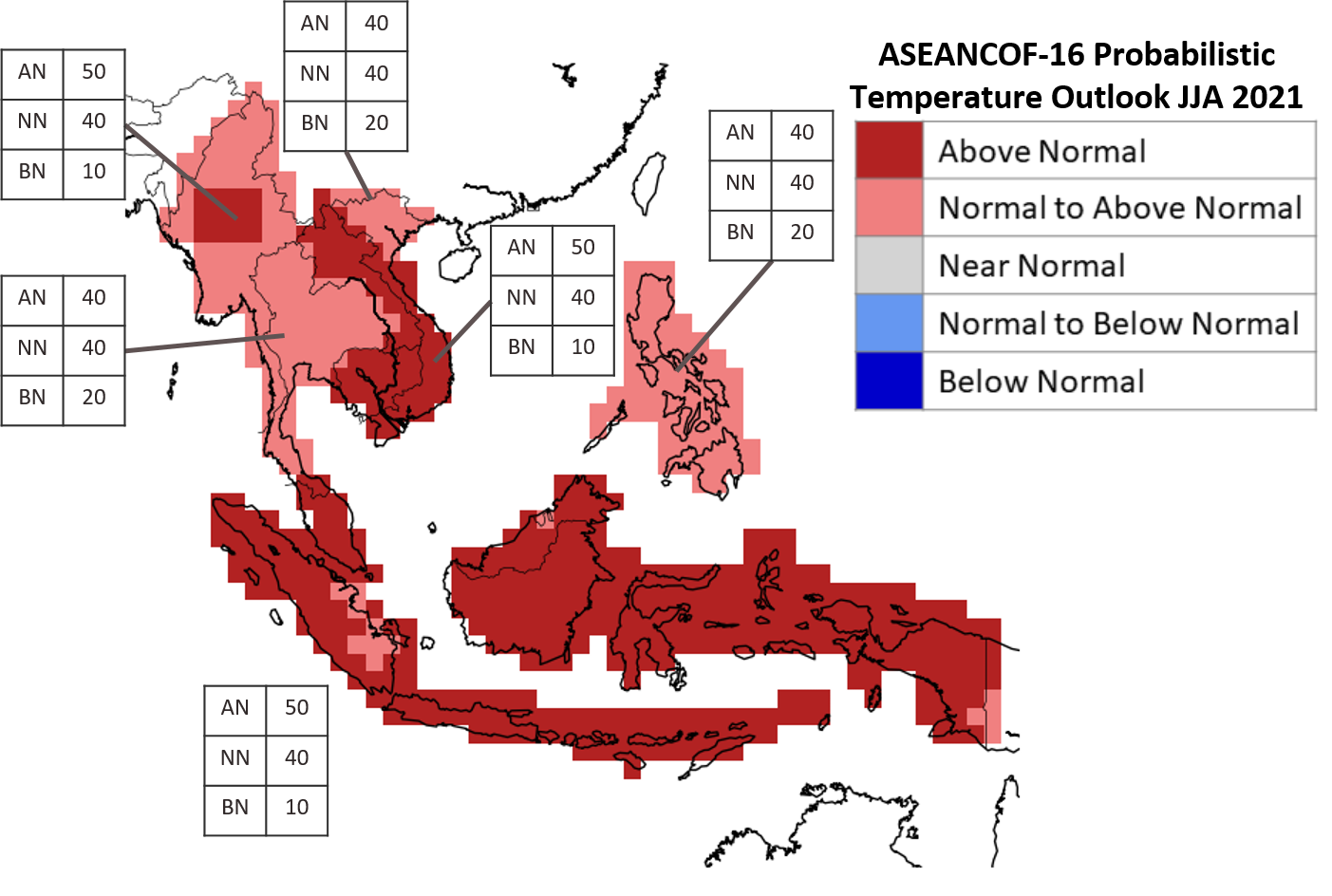 The Forum would like to convey its appreciation to the National Meteorological Services of the ASEAN Member States for sharing their national-level forecasts, the Global Producing Centres, the Southeast Asia Regional Climate Centre – Network, and other partners of ASEANCOF for sharing their products and expertise, and WMO for their continued support of ASEANCOF.