The forum outlook and its activities contribute significantly to one of the key roles of the ASEAN Specialised Meteorological Centre (ASMC), which is to conduct climate and seasonal prediction for ASEAN region through pooling the expertise of ASEAN National Meteorological Services.

The Twelfth ASEANCOF (ASEANCOF-12) was organised by the Thai Meteorological Department in collaboration with Meteorological Service Singapore as host of the ASEAN Specialised Meteorological Centre. Representatives from National Meteorological and Hydrological Services (NMHSs) of ASEAN Member States created a consensus forecast for the Summer Monsoon 2019 in the ASEAN region. The consensus for June-July-August (JJA) 2019 outlooks was achieved through online correspondence. The consensus was made based on completed questionnaires regarding current conditions and predictions for the Southeast Asia region as well as an online discussion. In particular, the forum took into account the significant influence of the El Niño Southern Oscillation (ENSO) and the Indian Ocean Dipole (IOD) on the climate system over Southeast Asia.

Recent analysis of Sea Surface Temperature (SST) anomalies over the Equatorial Pacific indicate above average SSTs across most of the Pacific Ocean. Borderline El Niño conditions have been present since SON 2018. The international climate outlooks predict El Niño conditions are likely to continue during JJA 2019. The present neutral Indian Ocean Dipole (IOD) is expected to develop into a positive IOD in JJA 2019 and the later part of the year.

Taking into consideration the national level forecasts, the present state of the climate, and the forecasts available from GPCs and other global centres, the forum agreed on the following consensus-based outlook for JJA 2019 for the Southeast Asia region:

For the upcoming Northern Hemisphere Summer Monsoon season (June-July-August), below normal conditions are expected over most parts of the Southeast Asia. However, there is a slightly enhanced probability of wetter than normal conditions over western and southern Myanmar and parts of Sumatra, Northern Celebes, Moluccas, and Papua islands of Indonesia.

The following maps provide the probabilistic outlooks for JJA 2019 season in terms of tercile categories of “Above Normal” (AN: upper tercile), “Near Normal (NN: middle tercile) and “Below Normal” (BN: lower tercile). 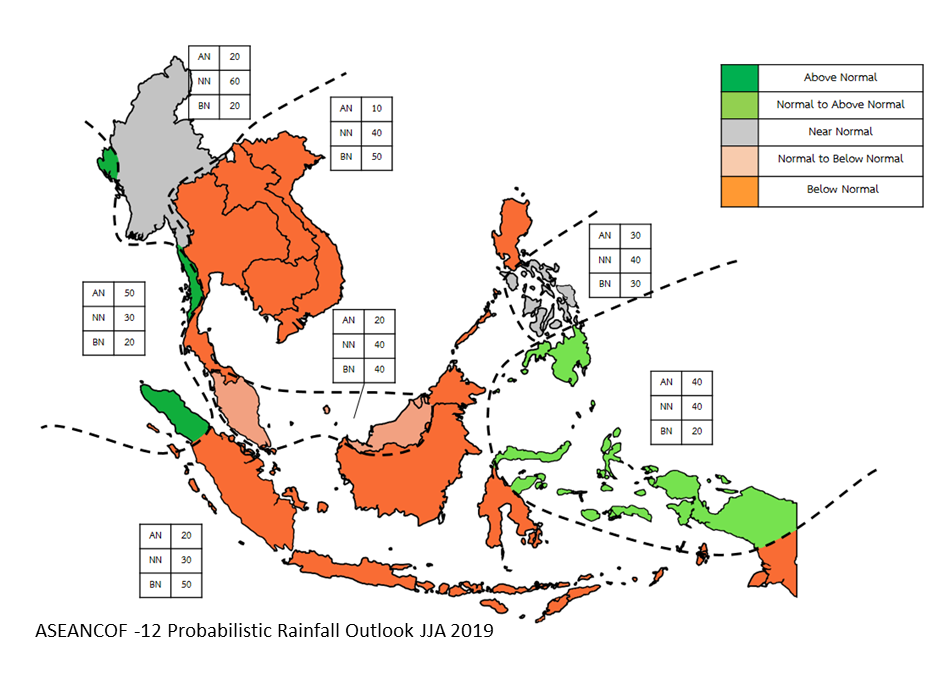 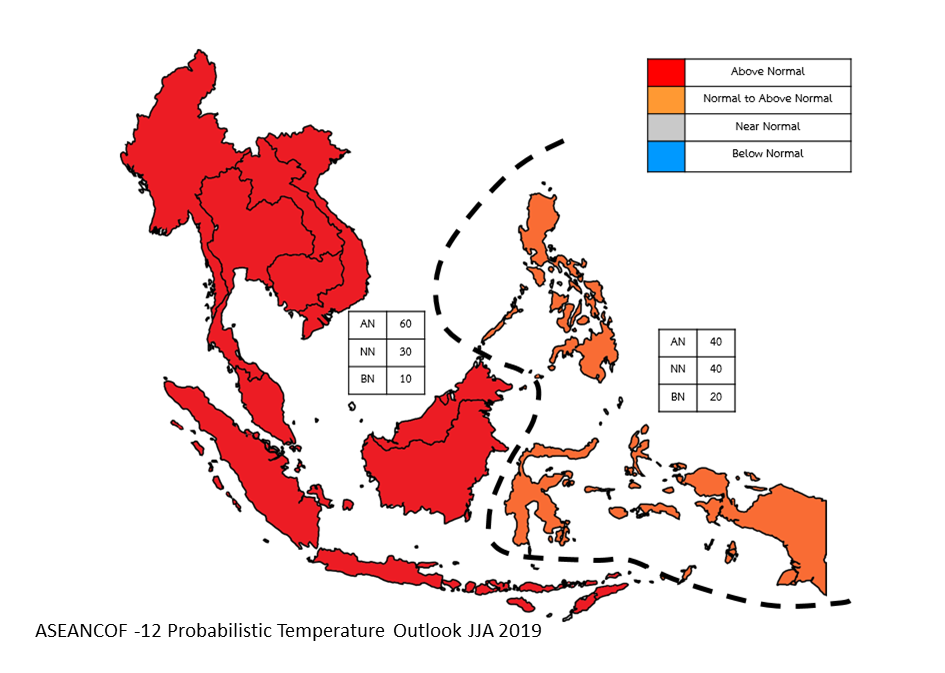