What are polar-orbiting and geostationary satellites?

Geostationary satellites circle the Earth above the equator at altitudes of about 36,000 km in a geosynchronous orbit i.e. they orbit the equatorial plane of the Earth at a speed matching the Earth’s rotation. This allows them to remain stationary with respect to the rotating Earth and thus provide images of the entire hemisphere below continuously.

Polar-orbiting satellites circle the Earth in an almost north-south orbit, passing close to both poles. The orbits are sun synchronous, allowing the satellites to cross the equator at the same local time each day. They orbit at a height of between 830 and 880 km and take about 100 minutes to complete an orbit.

Polar-orbiting satellites only pass through the same region twice daily and are able to provide data with high spatial resolution due to their relatively low altitude. They are also equipped with more sensors onboard and therefore able to map the weather and atmospheric conditions in greater detail than geostationary satellites. 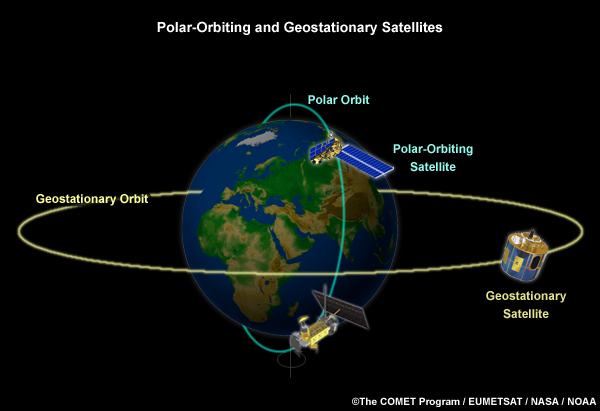